In the Gemara (Eruvin 43b), there is a section about the restoration of Beit Hamikdash and the Sanhedron. There are debates about how this would take place, but one the commentaries stated this:

"Elijah will announce his coming as the harbinger of Moshiach by making an appearance to the Beit Din Hagadol".

This took place on September 26 2017 in Jerusalem.

While most people would say that their is no Beit Din on the earth at the moment, a small group of Jews have already began to lay the foundations for this vessel to take manifest.

It is irrelevant to say that it is "unofficial", because nothing can be made official until Elijah comes anyway. It would be impossible for Elijah to appear to an "official" Beit Din because he himself is the one to officiate it.

This organization was originally initiated by Prof Hillel Weiss as a vision of establishing a world wide court based on biblical law. The Sanhedron refers to the court of Israel. The sub organization is called the 70 nations.

The 70 Nations was officially commemorated on September 26 2017 on the Mount of Olives with a sacrifice that could only be offered by non-Jews.

The night prior to this, there was an introductory conference at the Jerusalem Hotel. They introduced the gentile that they had formally trained to perform the korban.

The next morning, the day of the sacrifice itself, we began to make our way to the Hotel to meet with the rest of the group. On the way there, Malki made a comment about how he had a feeling we were going to end up being the ones doing the offering.

When we got to the hotel, the first thing we sought was to find the mikveh. It took us so long to find it that we ended up missing the event bus and got separated from the rest of the group.

We took another trolley and caught back up with the group at the Temple Mount. Eventually it was time to head to the Mount of Olives and everyone began to board the bus again. We were excited to be on time and not miss it again, but there turned out to not be any room for us on the bus anyway. We weren't sure how we were going to get to the Mount of Olives.

Malki then gets a phone call from a sister who had just landed in Israel. He told her about the 70 Nations and how they were getting ready to do a sacrifice and how we missed the bus. She asked him where we were at, and he told her how we were at the bus stop right outside of the Temple Mount entrance. She replied, "Me too!", and we looked up to see her waving her arm out of the taxi that she took from the airport.

Watching this take place was like watching a movie. The crazy thing is that this sister had talked to Malki about doing a sacrifice in Jerusalem years prior. He told her how this might be what she was referring to.

Our taxi driver sped through all the traffic so fast that we actually made it to the mountain before anyone in the group did.

When we got there, Malki was told in Spirit to take his shoes off. Not long after, Adam Eliyahu Berkowitz approached Malki and asked him if he knew how to slaughter an animal. The gentile that they trained and designated had backed out at the last minute for unknown reasons. At this point, we all knew that something monumental was about to take place.

There were a couple of Jews who were not happy about this. They did not like the idea of a believer in Yeshua performing the korban. The ravs pointed out how this was to be a sacrifice on behalf of the 70 Nations and that this need not be an issue.

They also did not like that Malki was intending to pronounce the Name. Their energy was very hostile toward us and they made an organized effort to stop the event. Thankfully there were others who could perceive the Divine orchestration taking place.

Eventually it was time for Malki to come to the microphone and speak. There was quite a crowd there, as well as an i24 News recording crew.

Malki gave his testimony of how he had lived life under the impression that he was a gentile, how he fell in love with Yeshua, and how Yeshua introduced him to the Torah and the fact that he was Hebrew all along.

He told them how the northern kingdom of Israel went astray into idolatry, and how Yeshua was bringing them back home in repentance. He told them that the Christians were coming back as a bride to the Jews.

He explained to them the whole purpose of why Yeshua came. He told them the parable of the prodigal son, and how Ephraim left the Father's kingdom to enter the world.

He also said the Father's Name in front of them all.

Adam made a comment about how the weight of the entire 70 Nations was on Malki's shoulders as he went to approach The Most High in korban. This is such a beautiful observation because of the story of Ephraim, about whom it is said "he will become the fullness of the gentiles".

Adam made another comment about how Malki was like Joseph to him; he was his brother but couldn't recognize him because he looked and talked like an Egyptian.

When Malki went to do the actual korban, his cry was before heaven was: "Abba, cleanse your land and bring your children home".

The prophet Elijah is often paralled with Aaron, about whom it is said he brought the children of Israel near to their Father in heaven by offering sacrifice. According to the prophet Malachi, it is indeed Elijah the Prophet who will reinstitute the korban to Israel and Judah. 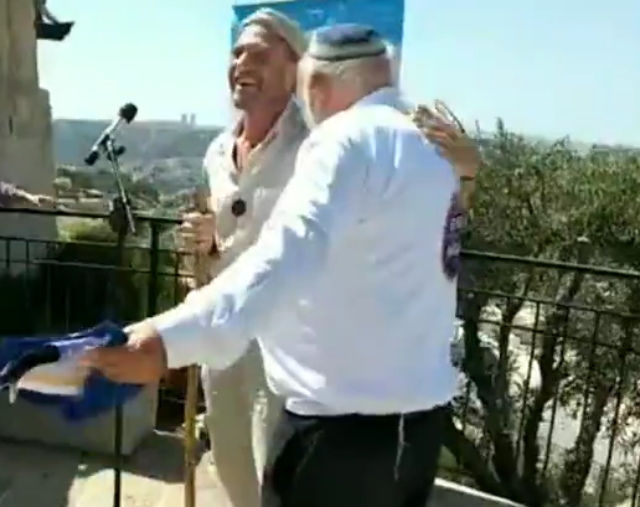